Each month features articles to help you grow in your faith, daily devotionals to keep you grounded in God's Word, and behind-the-scenes insights into our global ministry. 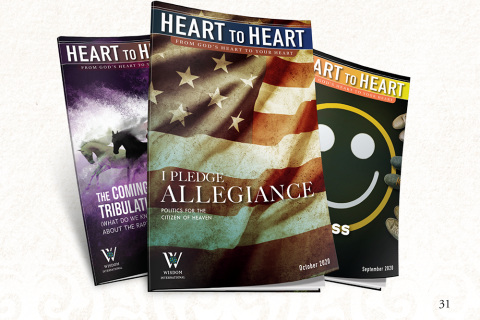 Get a Three-Month Trial

We will send you a complimentary 3-month trial so you can see Heart to heart for yourself!
Sign Up 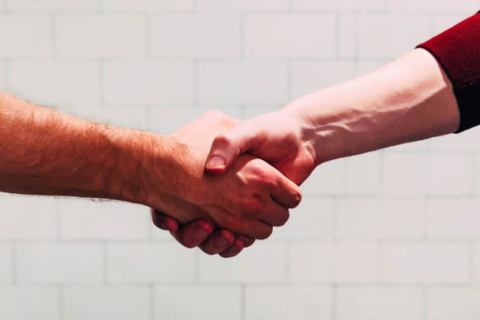 Heart to Heart is our gift to all of our Wisdom Partners. Become a partner and never miss an issue .
Partner With Us

One of the most heartrending “short stories” is attributed to Ernest Hemmingway. Although it’s very unlikely he was the author of this simple, six-word “story,” it’s undoubtedly one of the saddest messages anyone could read, much less experience: For sale: Baby shoes, never worn.

We’re told in Scripture that King David experienced the reality of this sad tale. Bathsheba had delivered their baby, conceived in their infamous act of adultery. When that baby died soon after birth, David surprisingly ceased his fasting and weeping; he worshipped God and resumed his normal schedule. His servants wondered why David would fast when his son was sick yet eat a meal soon after his son’s death. David explained:

David clearly declared that he and his baby would be reunited. But was David merely hoping for this, or does God’s Word support a future reunion between parents and deceased children?

While one verse doesn’t give us a full answer, the Bible does affirm David’s hope.

For you formed my inward parts; you knitted me together in my mother’s womb. I praise you, for I am fearfully and wonderfully made. . . . My frame was not hidden from you, when I was being made in secret, intricately woven . . . Your eyes saw my unformed substance; in your book were written, every one of them, the days that were formed for me, when as yet there was none of them. (Psalm 139:13-16)

David reveals that God, the Creator, is at work in every mother’s womb, embroidering each child by His creative design. This informs us that life begins at the moment of fertilization, which means death that occurs after conception is the death of a living, immortal person.

Here’s another staggering truth: When infants die, God’s purposes for their lives on earth have been fulfilled! In the mystery of His sovereign plan, whether it’s a matter of moments, or a few weeks or months, God’s destiny for their lives was fulfilled perfectly. Even if they die in the womb, God had His purpose for their lives, short as they may have been.

The Bible teaches that we are saved by grace. No one is in heaven apart from the grace and mercy of God.  However, the Bible also says people will be condemned by their works. You cannot be saved by works, but future judgment is described as a judgment of works (Revelation 20:12).

Nowhere in the Bible is anyone threatened with hell simply for having been conceived. People are condemned to hell because of their willful acts of sin and rebellion (1 Corinthians 6:9-10; Galatians 5:19-21; Ephesians 5:5). They are without excuse because they suppressed the reality of a Creator and the truth of God’s law implanted in their consciences (Romans 1:18; 2:12-16).

Preborn children and infants cannot suppress these truths and willfully reject them. Until children are older, they cannot assess the law of God written in their consciences. They cannot recognize how the glories of nature reveal a Creator to whom they are accountable.

The Bible never gives an age of accountability at which a person is capable of defying and/or denying divinely revealed truths. It varies according to the maturity of each child as he or she grows intellectually. Until someone is capable of willfully violating what God has written on the conscience and denying the reality of the Creator, that person will not be condemned. This applies to all the aborted, miscarried, and mentally handicapped children and adults in human history.

What’s happening with your child in heaven?

If you’ve endured the grief of losing a baby, find comfort in knowing that your child is experiencing heaven right now. The One who loves your child the most has taken that precious one into His Father’s house. Your baby didn’t wear the shoes you picked out, but the feet that would have worn them are walking on streets of gold. Your child is with Christ and was instantly made perfect and transformed into the image of Jesus Christ upon his or her death (Philippians 1:6).

David said, “My son can’t come back to me, but I will go to him.” Christian, just as your departed baby is now wholly perfected and enjoying the presence of Christ, know that you will one day be there too, reunited and praising the Lord together in worship . . . worship that will never end!