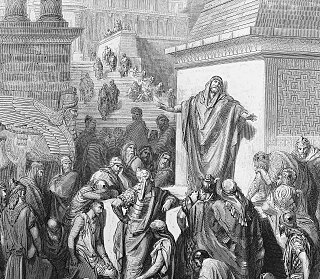 I think Jonah would have preferred that the book bearing his name only had three chapters.

If the first three chapters of Jonah took place in modern times, Jonah would be heading off to receive his Nobel Peace Prize and posing for the cover of TIME Magazine’s “Person of the Year” issue. He would have offers from seminaries across the country to come and teach budding preachers how to effectively communicate God’s Word.

Sure, He tried to run from God. Yes, he had to shower off the remains of being in the stomach of a great fish. But, he also preached the most successful sermon in history. The entire city of Nineveh repented of their violent sins and turned toward God. Their hearts and lifestyles were radically changed. By any evangelical metric, Jonah accomplished an unprecedented ministry marvel.

Unfortunately, for Jonah’s legacy, there's a fourth chapter in the book.

The final chapter reveals Jonah’s response to God’s grace toward the Ninevites. God spared them from total destruction. But Jonah hated the Ninivites. He considered them his enemies. God's mercy on them “displeased Jonah exceedingly, and he was angry” (Jonah 4:1).

Jonah was actually upset that his mission was a success. He was angry that the Ninevites were saved from the wrath of God. Jonah tells God in verse 2: “That is why I made hast to flee to Tarshish; for I knew that you are a gracious God and merciful” (Jonah 4:2).

He wanted them to be destroyed. He was so distraught that he even asked God to take his life. He would rather die than see his enemies saved.

The conversation between God and Jonah in Jonah 4 is instructive for us. It reveals three flaws in Jonah’s heart that might be present in us as well.

Jonah knew that God is gracious and merciful. He just said so in verse 2. In fact, Jonah had experienced the mercy of God himself as he was providentially saved from drowning at sea.

Jonah was more than happy to receive the mercy of God for himself, but his nationalism and hatred for the Ninevites prevented him from rejoicing in God’s mercy for those he didn't like.

After the revival in Nineveh, Jonah slipped out of the city to find a good spot to sit and watch. He was waiting for God to bring the fires of judgment down on this wicked city. He believed that the Ninevites would revert back to their sinful ways, and that God would deliver the justice they deserved.

While he waited, God caused a plant to grow and provide shade for Jonah. That made Jonah very glad. That night, God caused a worm to attack the plant, making it wither.

Once again, Jonah asked to die. This time, because of the scorching heat of the desert. He was frustrated that God would allow the plant to wither and die, increasing his own discomfort. God asked Jonah, “Do you do well to be angry for the plant?” (Jonah 4:9).

God's question was a good one. The simplest way to identify our priorities is to ask the question: “What is it that gets me excited or angry?”

Jonah was excited about the creation of the plant, but he was angry about the conversion of the Ninevites. His problem is one of mistaken priorities.

Jonah's priorities were mistaken. What do questions like these reveal about your priorities?

God asked Jonah one final question: “Should I not pity Nineveh?” (Jonah 4:11).

Jonah needed a lesson in identifying what is permanent, and what is perishable. He needed to learn to align his passion with the passion of God. And frankly, you and I need that same lesson.

God reminded Jonah that in Nineveh, "there are more than 120,000 persons who do not know their right hand from their left” (Jonah 4:11). Some people take these words to mean that Nineveh had 120,000 young children who haven’t learned the difference between right and left. I don't think that's what it means. I believe that God used an analogy to demonstrate the spiritual condition of the Ninevites. They were utterly confused in their own idolatry, like a child who’s confused which hand is right or left.

Friend, I wonder how it would affect our own view of the Great Commission if we viewed the unsaved less as our enemies and more as confused, lost souls in need of the guiding direction only God can give them.

The example of Jonah reminds us that we can do the right things, and even say the right words, but lack the right heart. Our ability to be used by God to reach the lost must begin with having the right desire for the lost. Le't stop seeing people as enemies, and start viewing them as a mission field into which God has sent us to represent Him well.

If you want to explore Jonah in more detail, Stephen's book is available here.

Frank Huston says:
I am desiring to be a 'learner' or disciple..
Donald Sanders says:
This statement "Jonah’s great mistake was in viewing the Ninevites as his enemy, and not as the lost souls they were." says it all. I am glad that through God's grace I do not see unbelievers or different religions as enemies. Now that I think about, I don't know what I would consider them. Maybe your right, we should reconsider the desire in our heart for the lost.
Wendy Jones says:
Outstanding, as always! How does one preach for over thirty years, and still draw fresh meaning from the word of God? Because the man and his ministry abides in the wisdom of God's own heart. Many blessings on your continued bearing of fruit that will last!
Lucy Dmot says:
Thank you for this email essay on Jonah. I have a couple of very good Christian friends with whom I somewhat routinely have to put my hand up and stop their angry rants about politics (both sides of the aisle are guilty.) I routinely remind them that even if the politics of the day were going in the direction that would them happy, the salvation quotient would remain the same. (I have listened to your sermons from 1 Peter/politics etc several times. Or those who are angry with a family member due to hurt they are causing the rest of the family. So often they don't pray for the individual. Of course, I am guilty as well with thoughts, although I've gotten pretty good at not saying them out loud. My thought life - angry, vengeful thoughts - are my challenge. I do feel fortunate that God has blessed me with a logical mind, and so knowing that I should I pray for the salvation of these individuals, I do. And when I do, my anger subsides. With a world that is increasingly divisive and angry, I find Christians getting caught up in the same emotional abyss, with a desire for vengeance. Usually when they are reminded to love their enemies, they agree. Thank you for your email. I needed it this morning, and will pass it on to others who struggle as well.
David Parrish says:
I can understand Jonah hatred toward the Ninivites.....from my understanding they were sacrificing children to pagan gods.....I know Jesus quoted that if one of these little children are offended, it would be better that you were cast in the sea with an heavy anchor. So I can understand, only through the love of Jesus can we love such a people. You can only experience real Blessing when you have become obedient in one of many of life's hardest trials. Jesus knows you're weakness, and I believe He will test you're faith whether it be genuine or not.
lois gant says:
I REALLY RECEIVED A LESSON IN THAT I SHOULD NOT BE UPSET AT PEOPLE WHO DO NOT ACCEPT THE LORD JESUS. I SHOULD PITY THEM AND SHOW LOVE TO THEM THAT WHILE I WAS NOT IN WILL OF GOD, HE LOVED ME AND SAVED ME FROM HELL. THANKS SO MUCH.
Jay Stephens says:
What a game-changer the way I look at the lost around me. I love what you wrote about the unsaved around us need God’s guiding direction in their lives. I will start praying for the lost around me to experience the same love, mercy, and grace that I have received. They are not our enemy. Thank you Dr Davey. You are such a blessing to me. I am really enjoying the Wisdom Journey each day. God bless you my brother. Jay
Randy Rackley says:
I too have a problem with loving my enemies especially political ones. I want to get my revenge on them myself instead of letting God do it. I must constantly remind myself that what they really need is Jesus and not my revenge. God help me to see them as lost souls in need of you just like I was. Thank you Pastor Davey for reminding me. God bless you.
Lillie Hinnant says:
Jonah needed to hate the sin of the Ninivites rather than the people. Ex. On 3rd grade level we teach children who are being treated bad with no resolve, to talk to God about the problem , ask Him to reveal how to deal with the problem; then know you can leave it there. Take a step back and watch to see what happens. If then you come up with your own idea of handling your problem God may just let you; but wait and pray as you look for an answer.

Here at Wisdom International, we believe that the Bible is God's Word. Therefore, it carries the authority of God himself and is the final authority by which we order our lives.

Sometimes the Bible can be confusing and difficult to understand. But God desires to be known. Scripture answers the big questions of life and should seek to know and understand what it says.

This section of our website contains Stephen Davey's articles and his ever-growing archive of answers to questions from people like you. If you have a Bible question and are seeking an answer from the Bible, use our contact form to submit your question for Stephen.

If you have questions, the Bible has answers and we want to help you! Ask Stephen your question here.

You can browse this section to read Stephen's previous answers and read all of his previous posts. To search and see if your question has already been answered, click on the search icon above.